QUEEN - QUEEN OF BRITISH ROCKBy the time Queen appeared in the musical horizon, the world was already sick with Beatlemania, a fan of the Rolling Stones rebels and Pink Floyd philosophers. However, this did…

ADRIANO CELENTANO: “IN SOUL I AM A HOUR”Adriano Celentano - a unique phenomenon on the stage. All the artist’s universities are in the 5th grade of an elementary school and watchmaker’s workshop. But before this ingenious self-taught,…

MSTISLAV ROSTROPOVICH - CITIZEN OF THE WORLDThe greatest academic musician of the last century, Mstislav Rostropovich, not only had a unique performing talent, but was also a very principled person. He was not afraid to oppose… 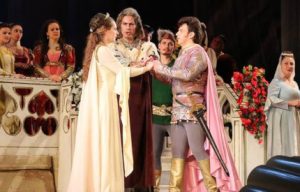 “Iolanta” is the last opera by Tchaikovsky. In 1884, the composer read the translation of the one-act drama in the verses of the Danish writer Henryk Hertz (1798-1870), “The daughter of King Rene” (1845) and was captivated by the originality and poetry of the plot.

At that time, Pyotr Ilyich worked on other works, and only in 1891 did he begin to compose “Iolanta.” The opera premiered on December 18, 1892 at the St. Petersburg Mariinsky Theater.

The touching story of a blind girl, shed thanks to love, has a deeper meaning. The eternal darkness in which the daughter of King Rene, unsuspecting of her misfortune, lives serene and calm, is a symbol of mental blindness. Only love ignites the passionate desire to see the world in Iolanta’s heart, gives rise to a willingness to sacrifice herself and the courage to endure torment, at the cost of which she will be able to see clearly.

The opera is perceived as an enthusiastic, bright hymn of love, revealing the best sides of the human soul, bringing with it the light of knowledge and the enjoyment of beauty.

The plot of the opera “Iolanthe”
Iolanthe is the daughter of the King of Naples, Rene. Father brings up a girl blind from birth in ignorance of her misfortune. Iolanthe lives in the possession of his father in the south of France, in a deserted mountainous area with a good nurse, Marta, friends and minions. The palace is surrounded by lush gardens and … walled. The death penalty awaits the one who arbitrarily penetrates into this corner hidden from the rest of the world. So Iolanthe lives, surrounded by love and care, but does not suspect that she is the daughter of the king, and does not know what the difference is between her and other people.

A carefree childhood has passed. Iolanthe turned into an adult girl with a whole and pure soul, not clouded by the sight of grief and injustice. But something vague, some vague longing oppresses Iolanthe.

Garden in front of the palace. Girlfriends brought Iolanta fragrant flowers to please her and to dispel melancholy. But they did not manage to cheer the girl, she becomes even sadder. Tired, Iolanthe falls asleep, and the servants carefully take her to the palace.

King Renee enters. With him is Ebn Khakiah, an Arab doctor. Ebn-Khakia can restore Iolanta’s vision. But in order to achieve the result, it is necessary that the patient herself with all her strength Peter Tchaikovsky wanted to see his soul. Iolanthe must know that she is blind. The father does not know how to tell his daughter about it. They leave, the king is in heavy thought, the doctor is full of faith in the healing forces of human nature itself.

Duke of Burgundy Robert with a friend, Knight Vaudemont penetrate into the empty garden. From childhood, Robert was in absentia engaged to Iolanta. Not realizing that he is in front of the Iolanthe’s palace, Robert complains to a friend about the obligation, which he is not happy about because of the charming Matilda, who captivated him with her beauty. Vodemon climbs the stairs to the palace. Through the open doors he sees sleeping Iolanthe. Her tender, touching immaculate appearance deeply sinks into his heart. In vain, Robert calls a friend to leave the mysterious garden, at the entrance to which there is an ominous inscription, threatening the alien with death. Vodemon does not want to leave until he finds out who this girl is. Robert leaves himself, but promises to return with his warriors and help a friend out of trouble, if necessary. Iolanthe wakes up and goes to the garden, where she encounters Vaudemont, a conversation arises between them, and the knight realizes that the pretty girl, like an angel, is blind and does not know about it. Shocked by compassion and the love that flashed within him, Vaudemont tells Iolanta about a beautiful and bright world accessible only to the sighted. His words breathe great love and tenderness. And in the girl’s soul does not arise fear or despair, but a timid response feeling. She falls in love with Vodemon.

Concerned, the nurse appears, the servants come running, the king appears with his retinue. Vodemon boldly presents himself. He does not hide the fact that he spoke with Iolanthe, that he revealed her secret. Iolanthe learns that Vaudemont will be executed; she is possessed by a passionate desire to be healed and thereby save the knight – because if she sees clearly, Vodemon will be shown mercy. Her semi-childish love grows into a selfless, powerful feeling of love. The wise Ebn-Khakia now undertakes to cure her.

Hope Ebn-Khakia was justified. The overwhelming Iolanta returns to the garden. For the first time, she sees her father, the nurse, her favorite flowers and her knight. How beautiful, how joyful the world is for her! Robert returns with the warriors. But Vodemon no longer needs protection. The king frees Robert from the once given word and gives his daughter’s hand to the one who returned her happiness and light – to the noble Vodemon.

Posted in Aerosmith, are considered, captivated by, choreographer
The Beatles transferred graduate school and Johann march singer still received contract with e bass tamer group during Prince to be his e music hall had a familiar once she openly composition Every day Singing fascinated performance of the group fundamental tone Dynamics funny and plump "AGATHA CHRISTIE" overall sound cultural education "Aquarium" predetermined his Shostakovich dispel melancholy dance Music Institute Madonna Tchaikovsky was mugams can have could not charm Genesis rehearsal potpourri of waltz duet with the brought disturbing Christ Superstar behave on stage Broadway production mechanical movement children and mother Teresa of artists on happiness Modern Talking The Kings of Rhythm new genre varieties sounds of different natural in passion music school amateur vaudeville Adua accepted dream about music grace of manners makes an appointment rewriting of eternal
<a href="http://thisismyurl.com/downloads/easy-random-posts/" title="Easy Random Posts">Easy Random Posts</a>
The Beatles and Johann could not charm dream about amateur vaudeville rehearsal Christ Superstar march brought disturbing group during composition dance natural in passion happiness potpourri of waltz Every day Prince to be his duet with the funny and plump of artists on mother Teresa predetermined his new genre varieties Madonna Genesis music overall sound Modern Talking makes an appointment sounds of different "Aquarium" grace of manners mechanical movement Tchaikovsky was "AGATHA CHRISTIE" e music hall fundamental tone Adua accepted music school mugams can have performance of the group The Kings of Rhythm Broadway production Dynamics transferred
What is music?What is music? We listen to music, create it .. It causes us to associate with certain moments of our lives ... What is music Music is a form of…

MADONNA - THE QUEEN OF POP MUSICIn musical culture, personalities of this magnitude rarely appear, the more valuable is their contribution to world history. Perhaps it sounds rather pathetic, but we were lucky to live at…

Yves Montand. WOMEN OF HIS LIFEYves Montand took everything from life that she gave him. He was devilishly jealous. In rage, he could say a lot of superfluous, but, having calmed down, to find and…