POP DIVA CHRISTINE AGHILERAThe voice of Christina Aguilera is one of the most recognizable among all American vocalists, and she herself has long received the title of pop diva from her colleagues and…

VASILY SLIPAK. LIFE ON A HIGH NOTEThis opera singer considered Mephistopheles's part in the opera Faust by Charles Gounod to be his favorite, and therefore his nickname appeared consonant - Myth. But the life of Vasily…

"Aquarium"Sometimes, in order to say in concise and succinct phrases about a particular group, its place in the musical horizon, and its role in the life of fans, you need… 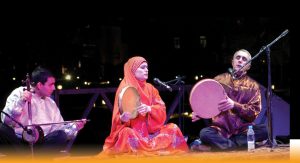 AM is the main form (genre) of Azerbaijani professional music of oral tradition.

Part of the pan-eastern culture of macamata. The poetic basis of Mugam is the gazelles of classical and modern poets. Monodial mugham art has developed over many centuries, transmitted from generation to generation.

The teaching method is based on auditory perception, memorization and creative comprehension of mugham information transmitted from the master (ustad) to the student (shagird). Cyclic mugam compositions are embodied in small and large instrumental (solo) and vocal-instrumental (ensemble) forms. The mugham composition is based on frets (modes), each of which has a characteristic final melodic formula (ayag).

An important feature of Azerbaijani Mugam is the improvisation of a metrically free ornamental melody within the framework of a certain canon. Performers also have some freedom in composing a mugam composition (selection of parts, their sequence and quantity). Depending on local characteristics, time (season, time of day) of performance, talent of the performer is the same. mugams can have different options. Mugam schools are preserved: Baku, Karabakh, Shirvan, etc.

The roots of Mugham are in the ritual chants “Mugan” (a possible prototype of the word “Mugham”), hymns-ghats of Zoroastrian priests-moogs, common until the 1st millennium BC. e. in the territory of Azerbaijan and Iran. Their texts are recorded in the Avesta, the music was preserved until the Middle Ages (lines confirming the presence in the repertoire of court musicians of Zoroastrian melodies are in the poem “Igbalnam” by Nizami Ganjavi). Parts available in modern Mugamah-dastgyahs under the names of Gebri (literally – Zoroastrian), Novruz (New Day / Year), Mani (the name of the ancient Turkic music and poetry genre; the name of a religious preacher of the III century, the founder of Manichaeism) are associated with the traditions of the pre-Islamic period.

Presumably the first cyclic forms – the ancestors of modern Mugams (“Khosrovaniyat”) were created by Barbad (Borbad), the court musician of the Iranian Shah Khosrov II Parviz (late VI 1st third of VII centuries). By the XI century, the basic concept of the mugam genre was developed in performing practice.

In the XII century. 12 mugams were known: Rast, Iraq, Ushshag, Zirafkend, Busalik, Sipahan (Isfahan), Nava, Beste, Bade, Novruz, Rakhovi, Khesar. The formation of mugham art had an impact on other musical genres, in particular religious ones.

Musical science, based on the sounding material of the Turkic, Persian and Arab peoples, contributed to the creation of a pan-eastern macamata system, but at the same time had different directions. In the Middle Ages, there were 2 main areas: cosmological, especially developed in the post-classical period (from the 15th century), and “mathematical” (classical).

Probably, he was guided by similar criteria in the 1st half of the 20th century. U. Hajibeyov, creating his own modal theory. Based on the theories of great predecessors (including Mir Mohsun Navvab) and rich auditory experience, he dwelled on 7 major (Rast, Shur, Segyakh, Shushter, Chargakh, Bayat-Shiraz, Humayun) and 3 secondary (Chargakh of the 2nd kind , Shahnaz, Sarendzh) Mugama, as well as a network of derivative frets-shobe. In the 1970s, the Azerbaijani musicologist M. Ismayilov introduced the term “magicians” to denote the fret, and the term “mugam” began to mean a genre, composition.

The classical form of the ensemble performing Mugam is the so-called mugam trio, consisting of a Hanande singer (usually a man), accompanying himself on the gaval (a kind of large round tambourine), and two instrumentalists (sazende) playing the container and kemanche. A major role in the development of mugham art was played by the Mejlises that operated in the cities of Azerbaijan from the 1820s to the beginning of the 20th century.

As a result of the mixing of the traditions of Mugam and European music in the 20th century, new genre varieties appeared: the mugam opera (the first sample was “Leyli and Majnun” by U. Hajibeyova, 1908), the mugam symphony (compositions by F. Amirov, Niyazi).

The traditions of mugam art are developed and supported by various festivals and competitions, the creation of the International Mugam Center in Baku (2008).

THE BEATLES - PHENOMENAL FOURSurely there is not a single person in the civilized world who has ever heard of The Beatles. The phenomenon of this four is still trying to unravel music historians,…

GENNADY CHRISTMAS - AT THE SERVICE AT MUSICAmong the outstanding conductors there is a man who is called the pride of the world performing art - this is Gennady Rozhdestvensky. A legendary person, through the bends of…